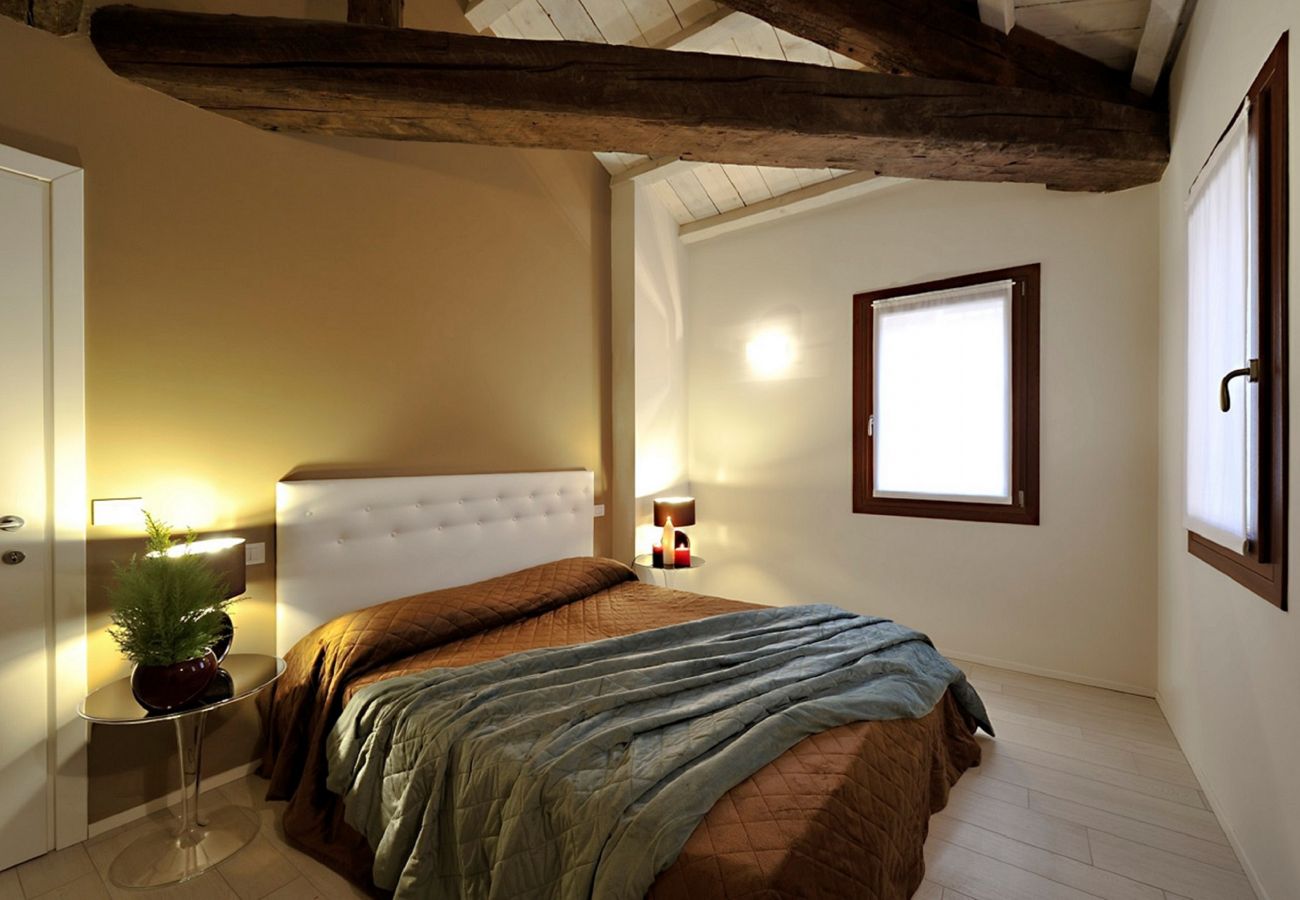 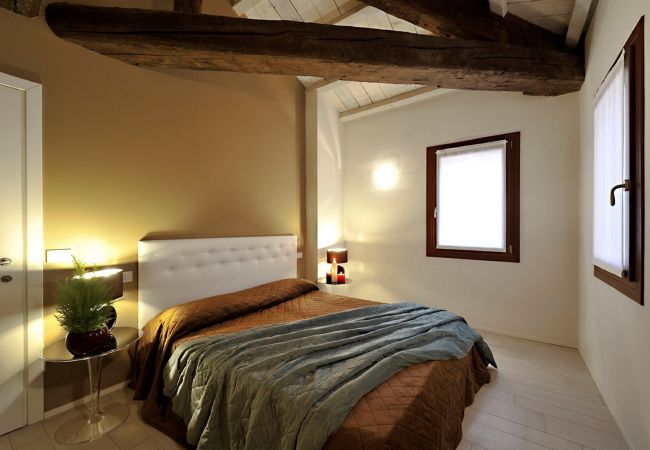 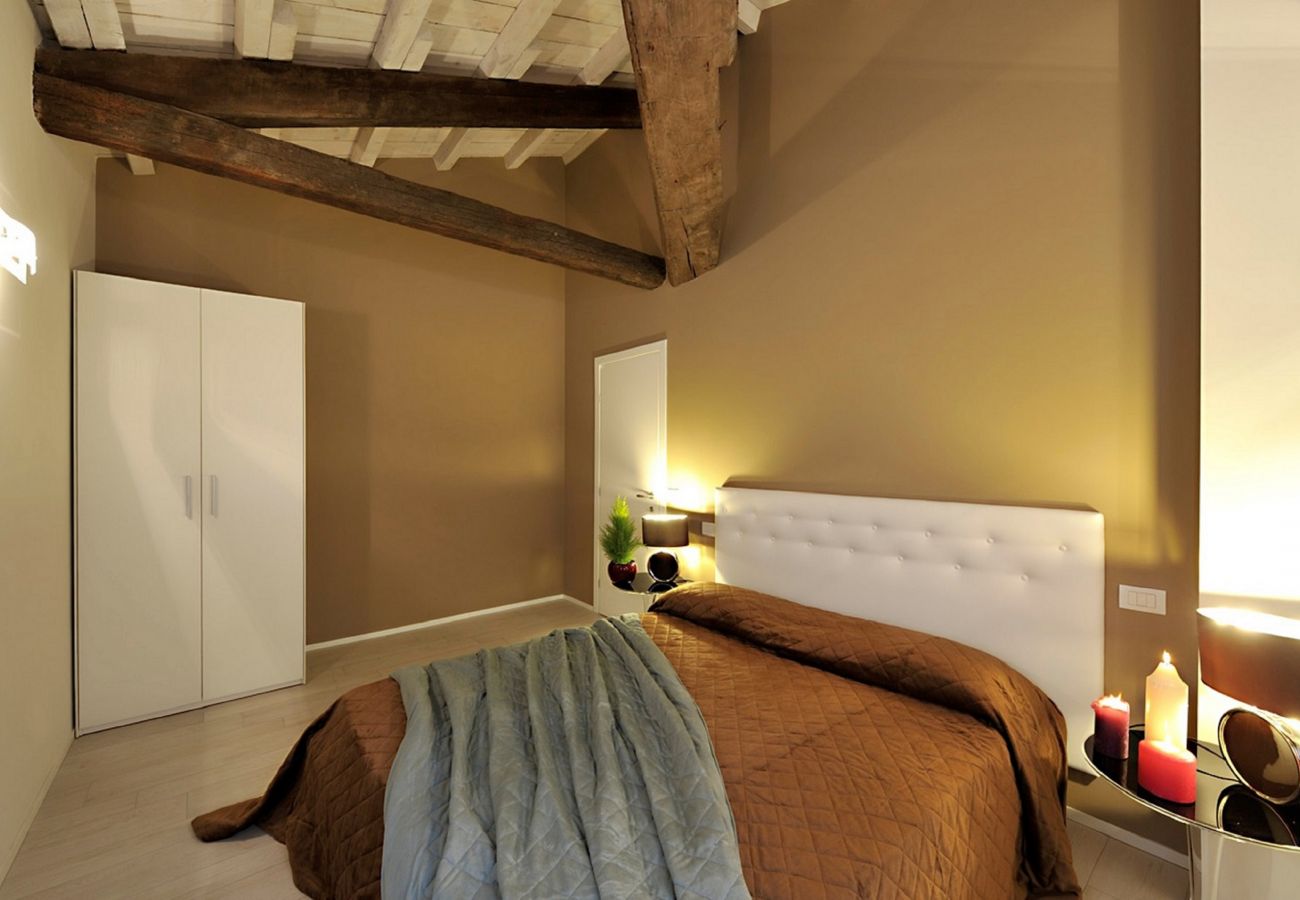 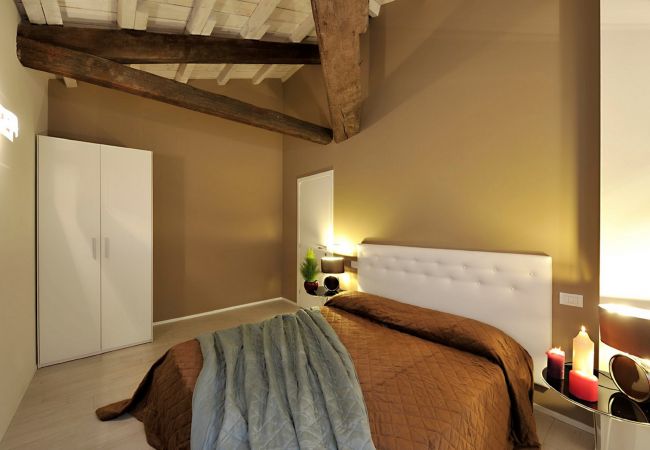 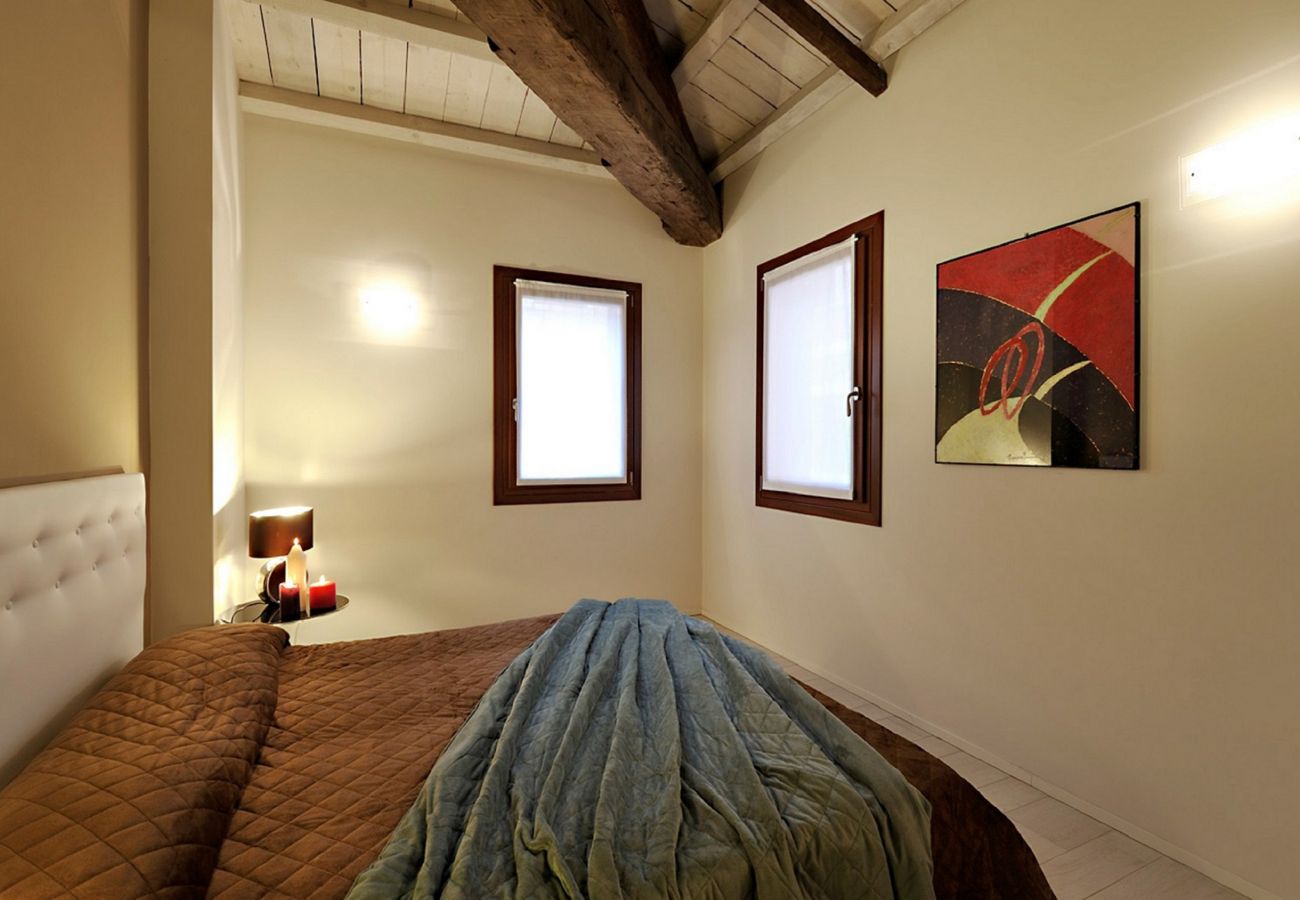 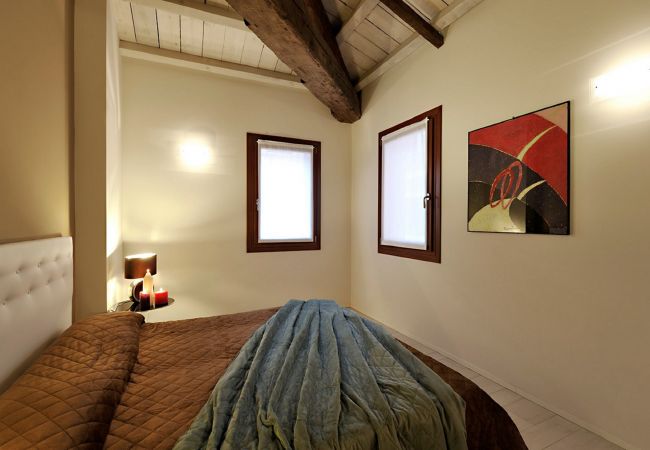 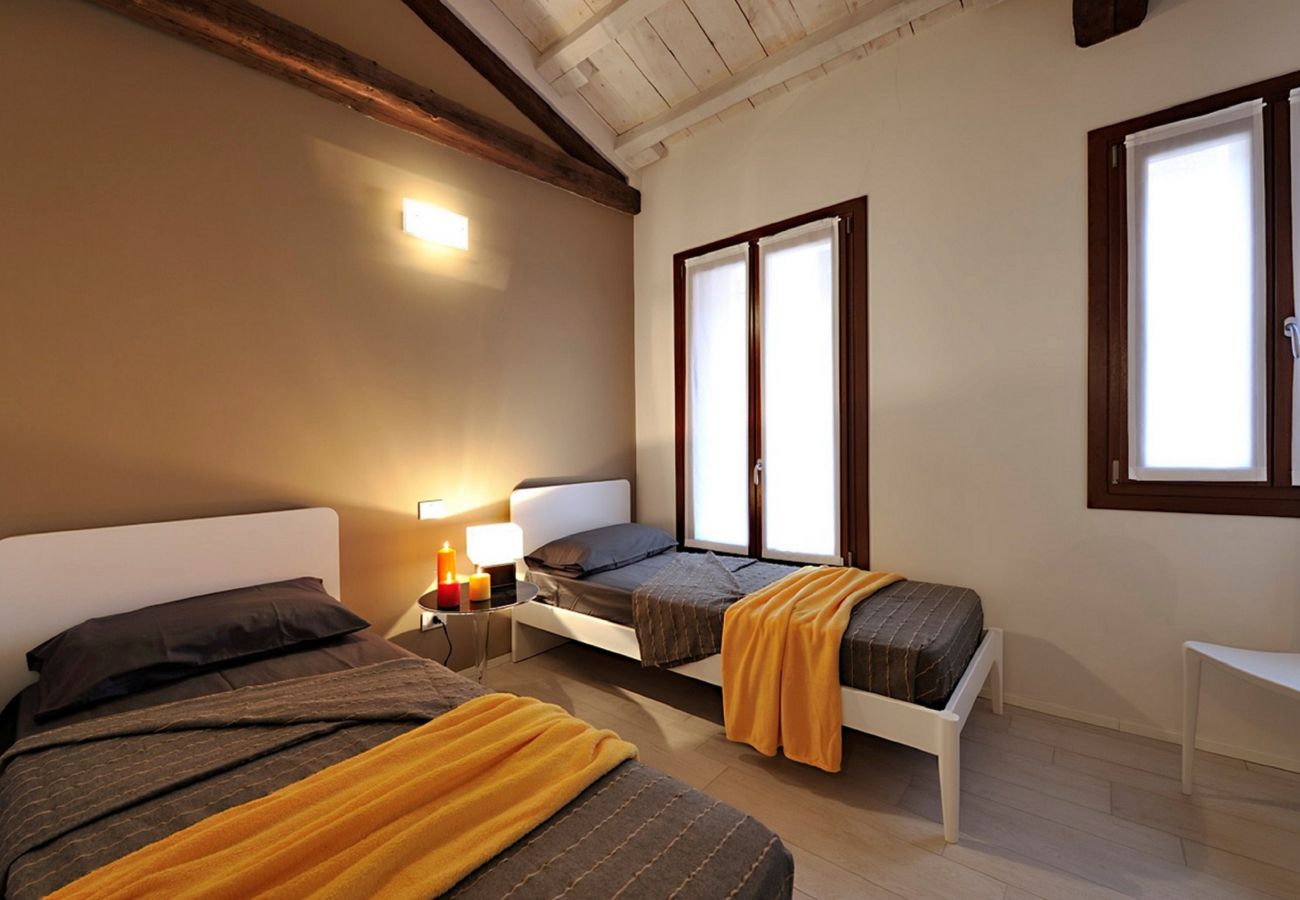 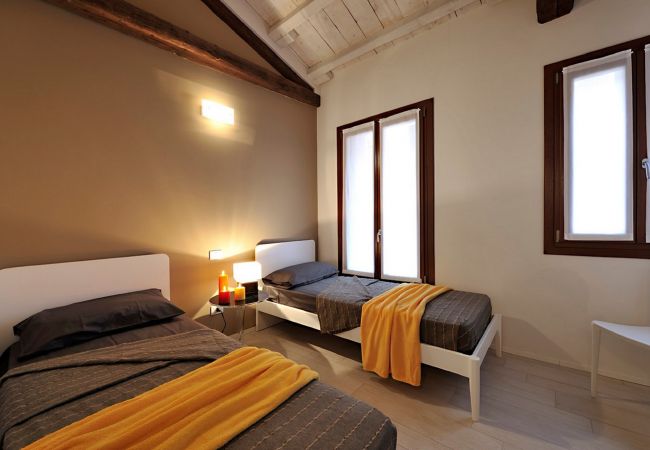 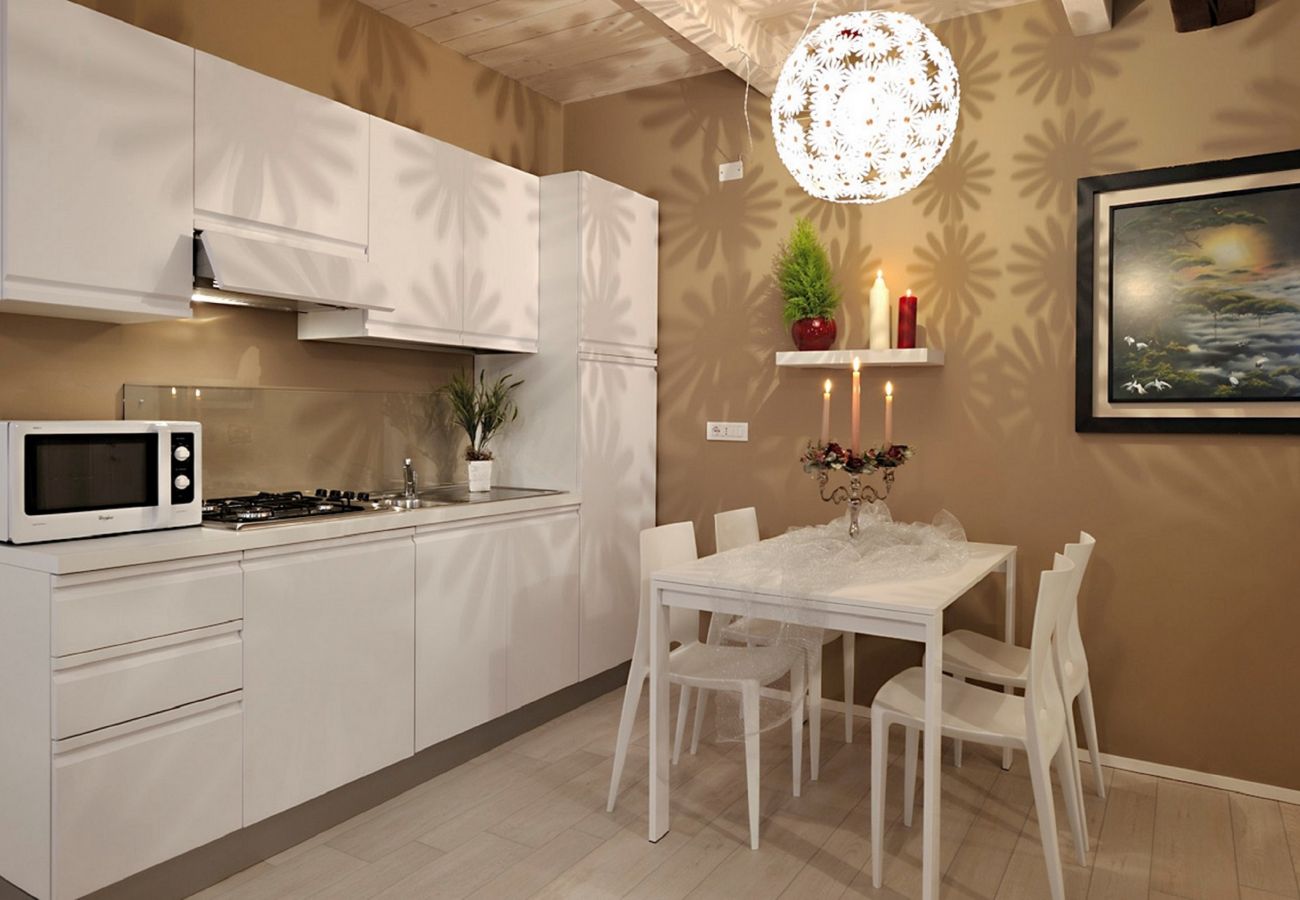 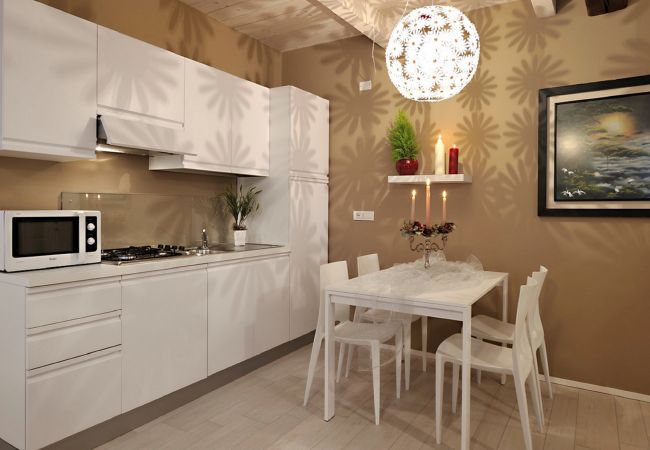 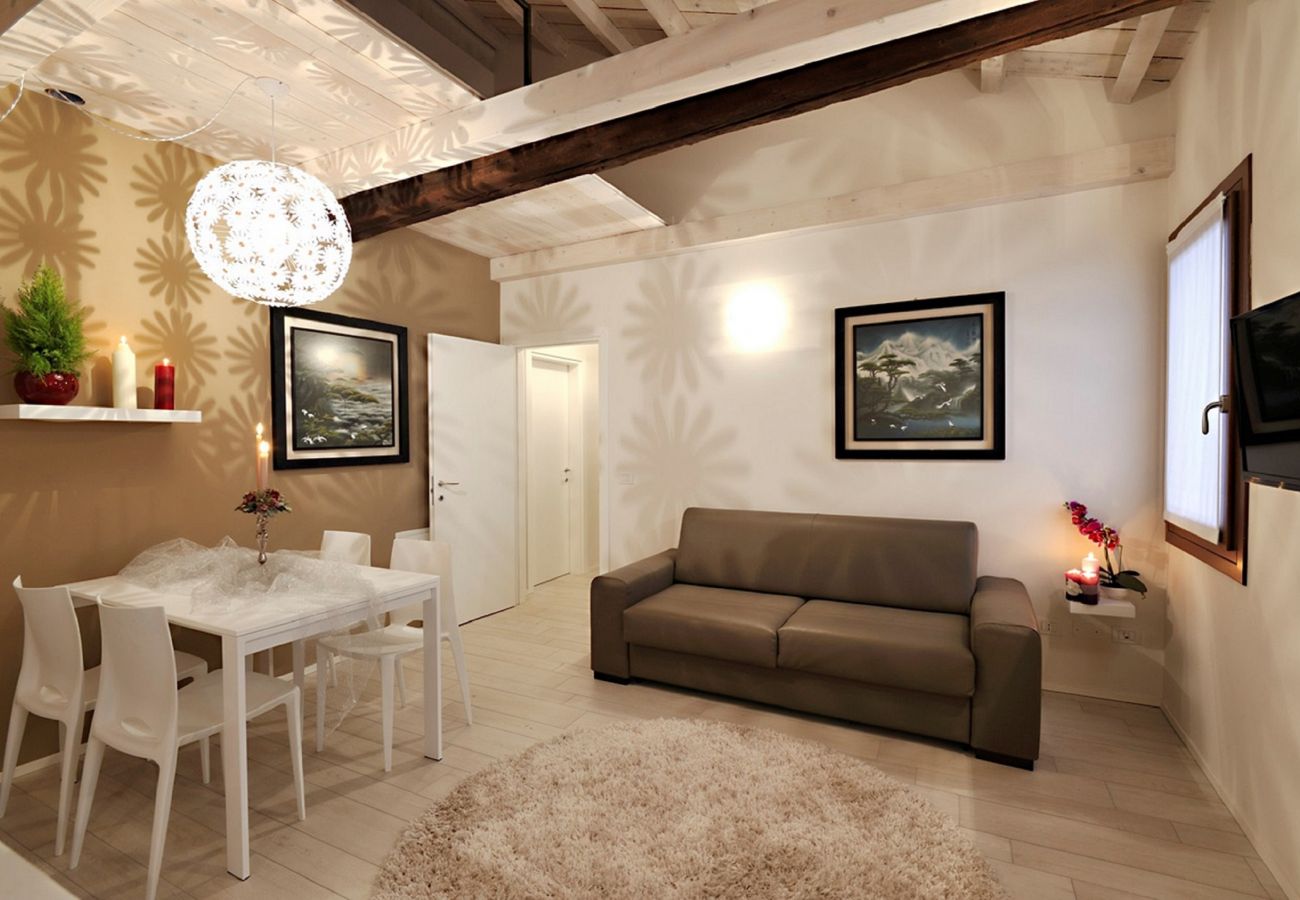 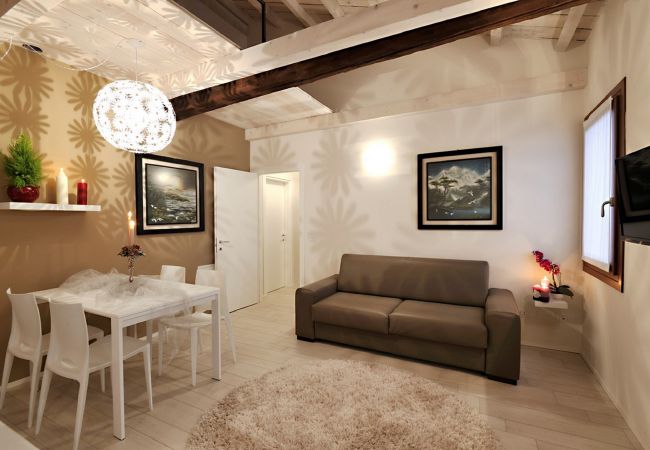 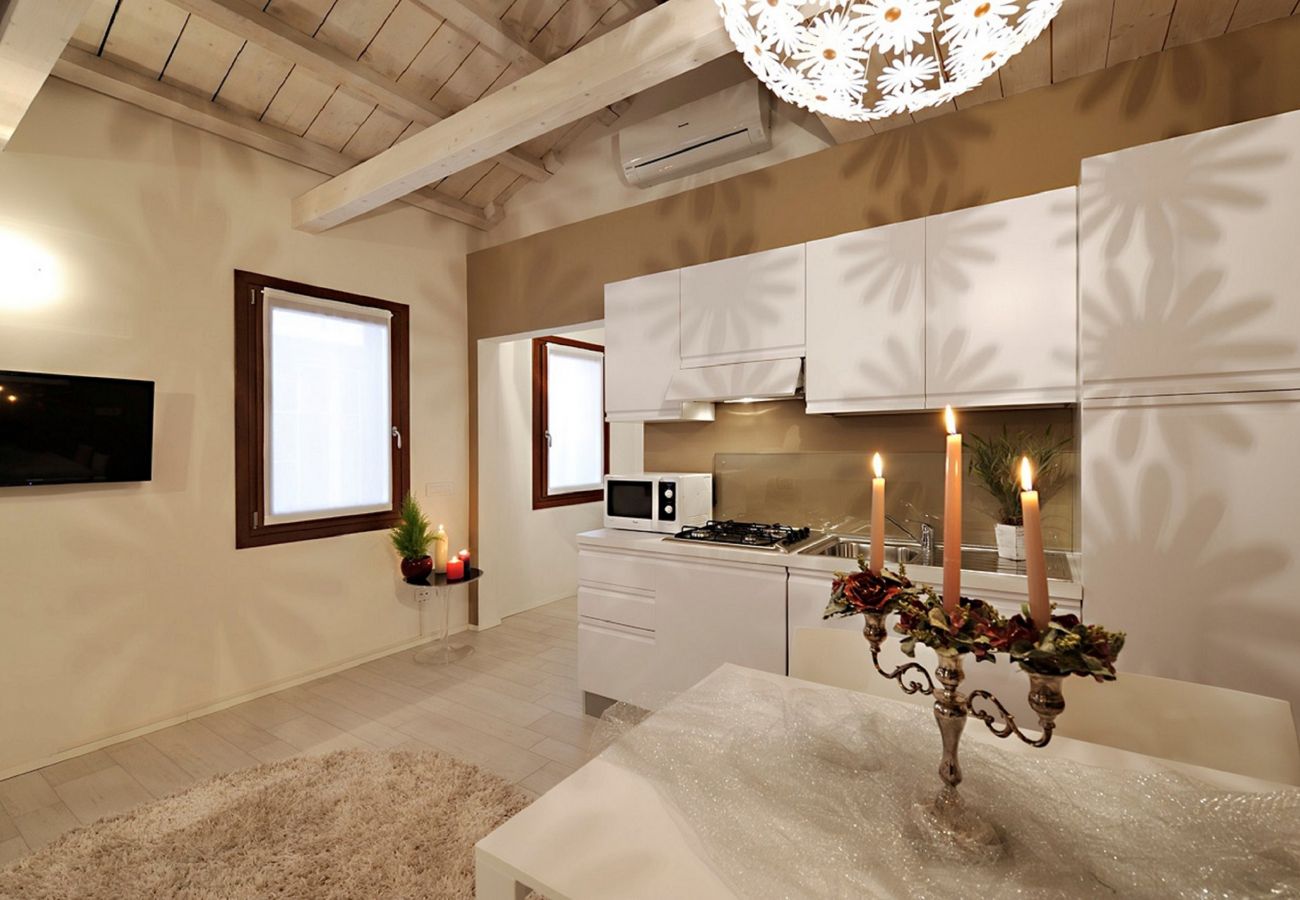 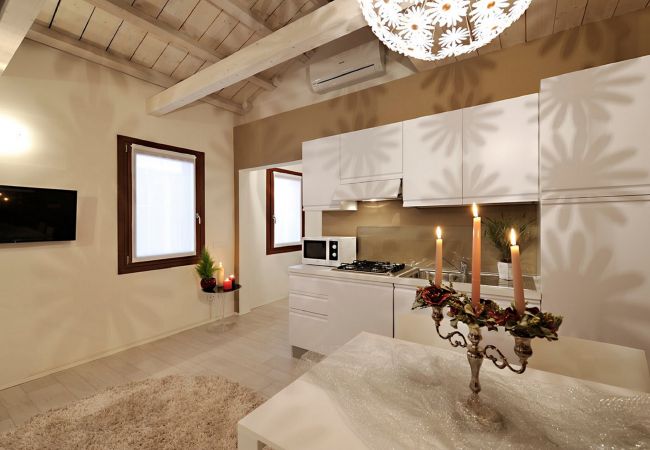 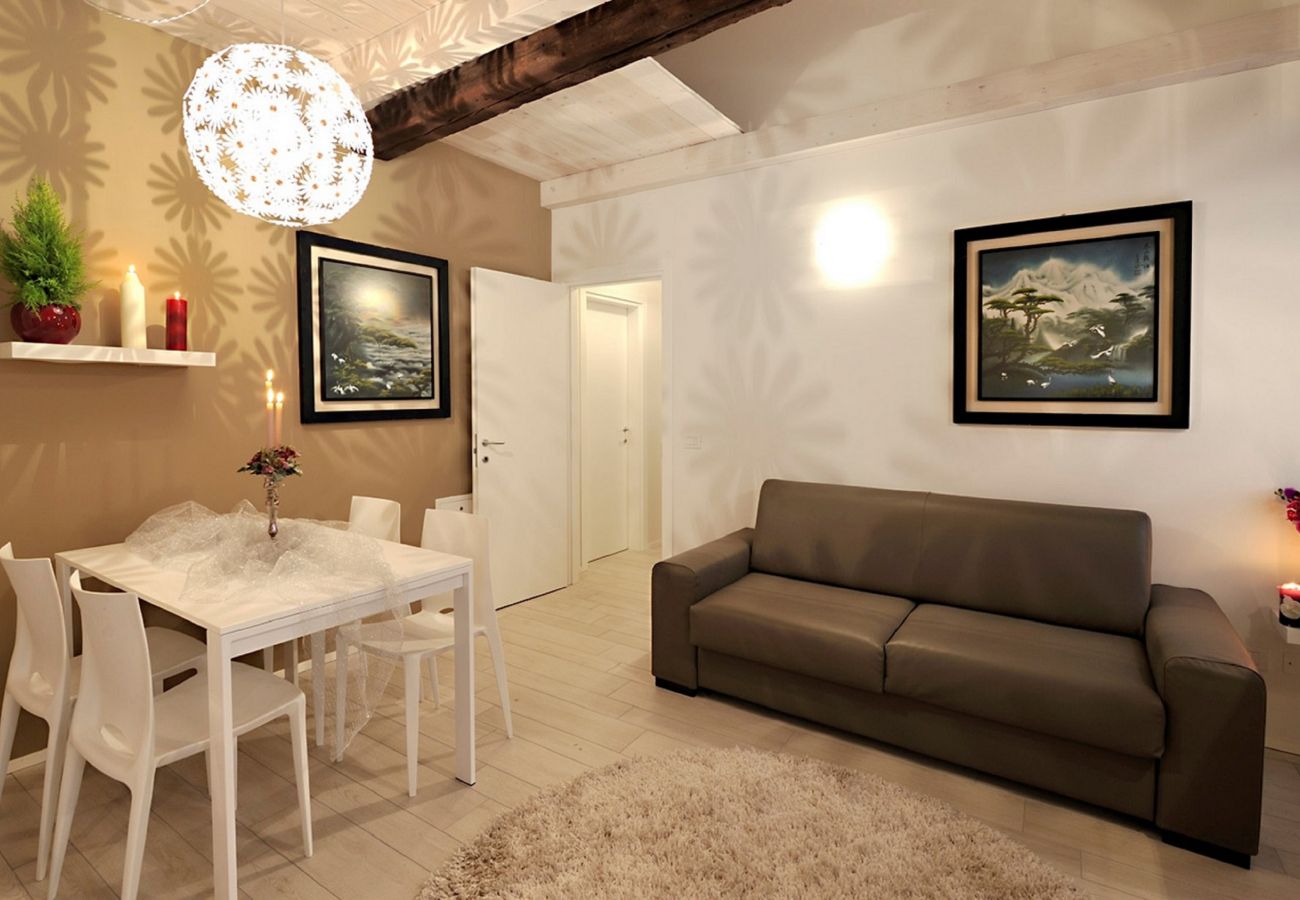 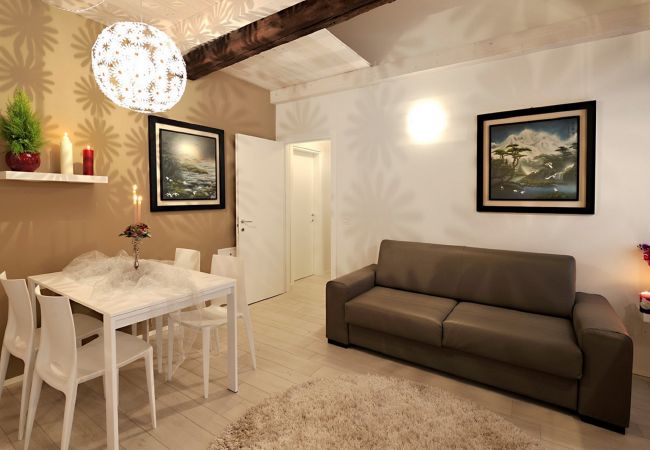 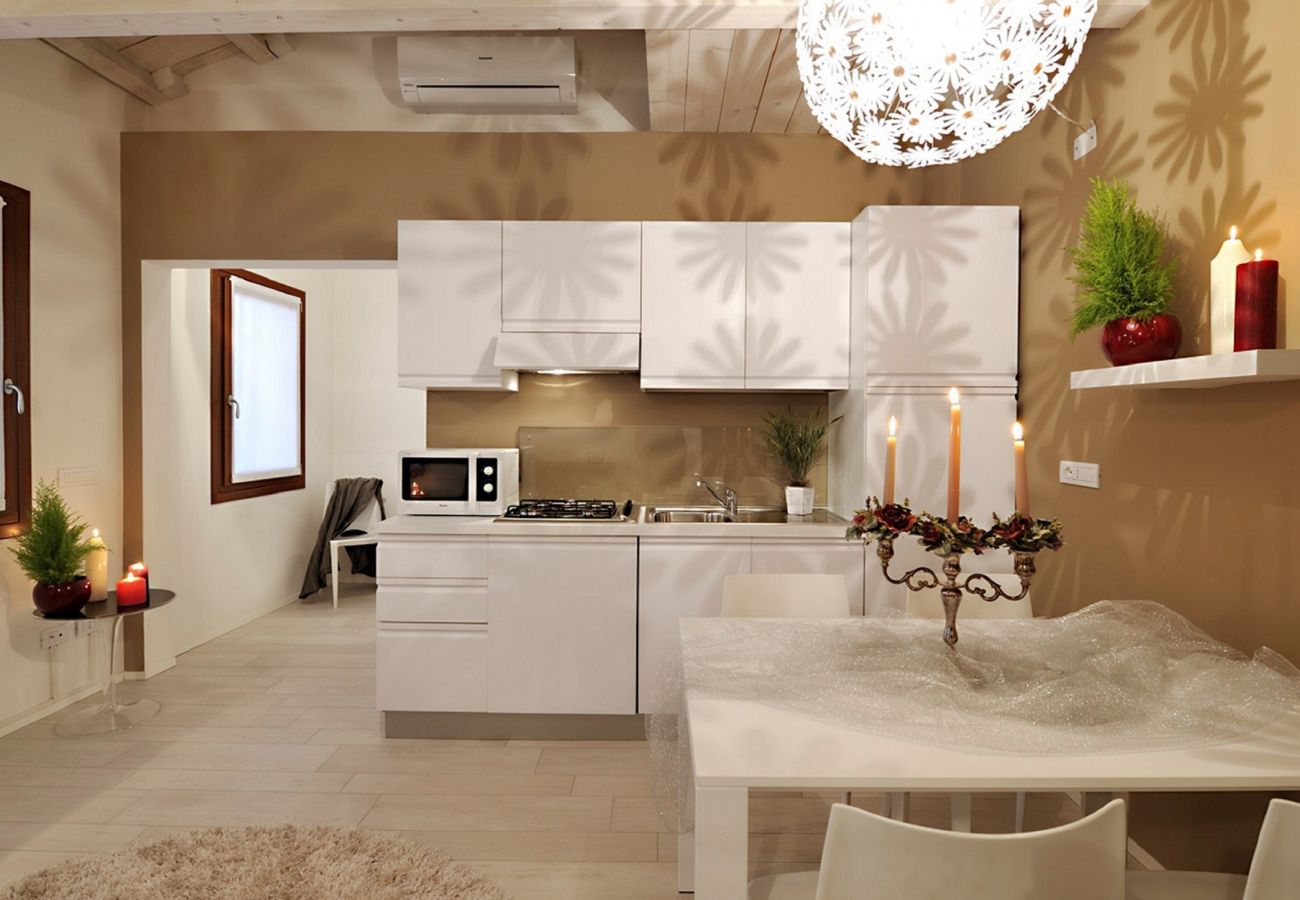 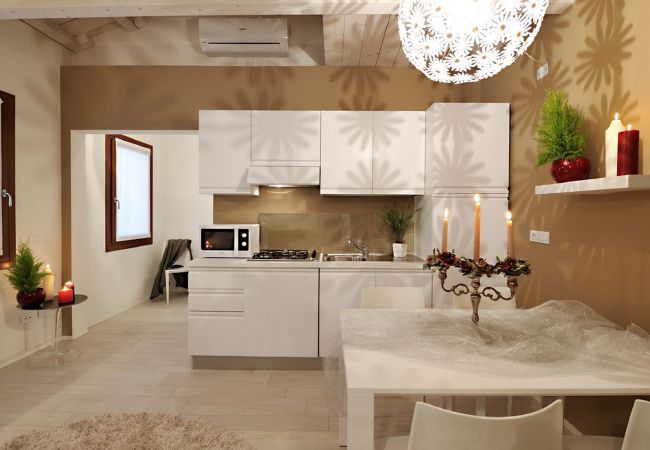 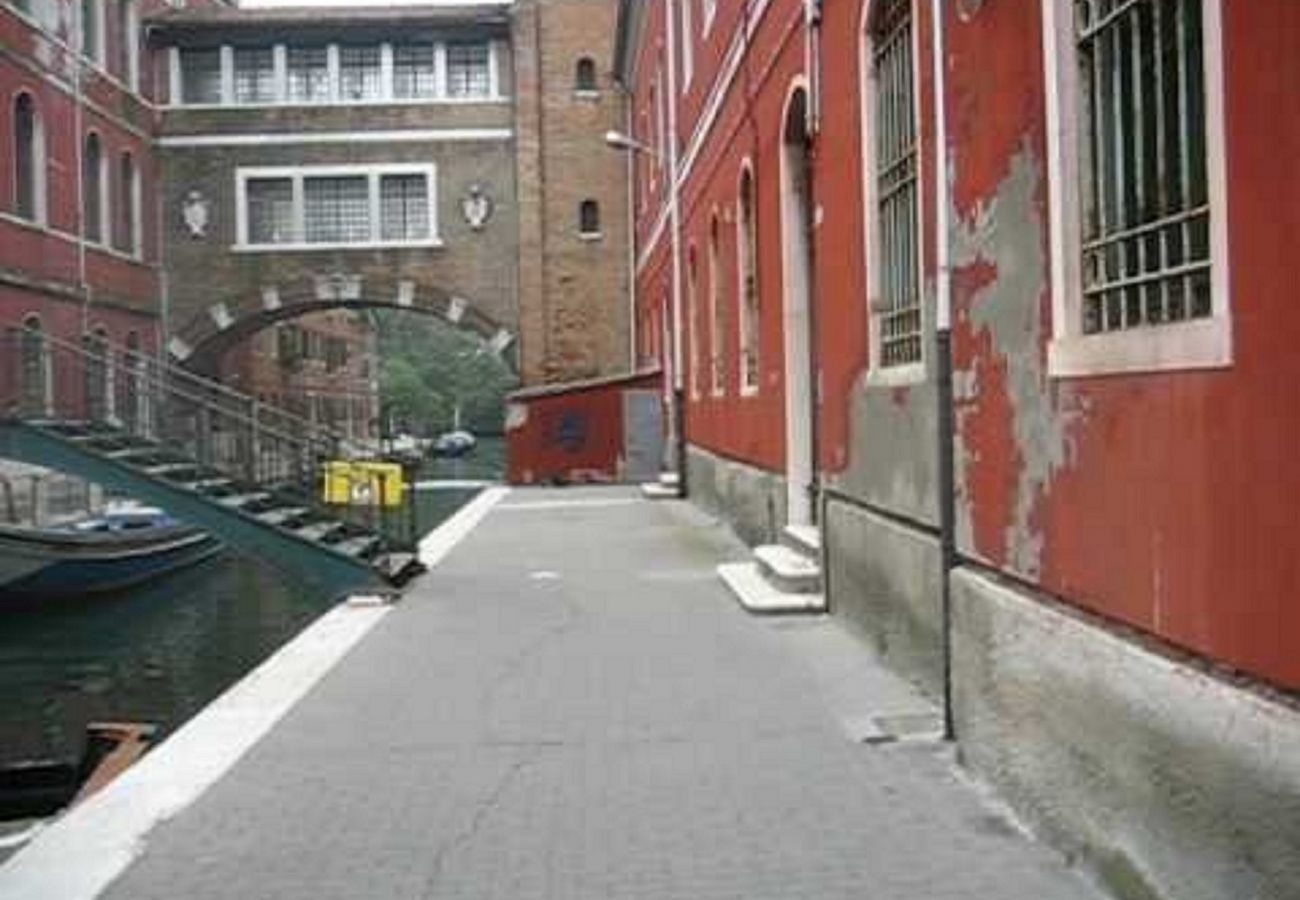 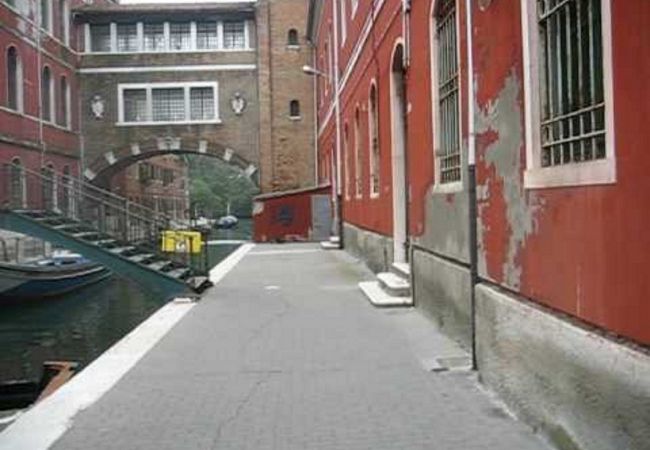 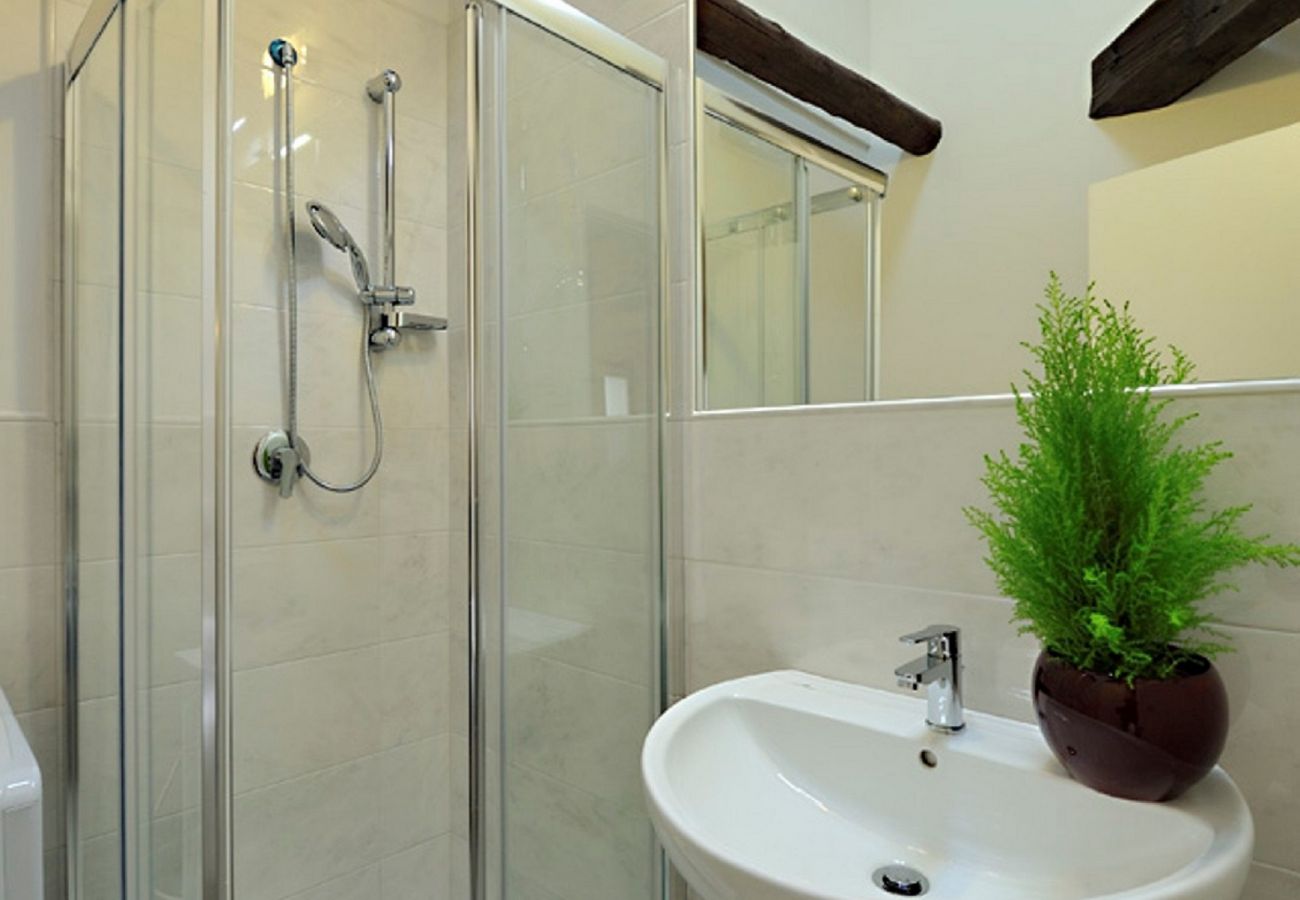 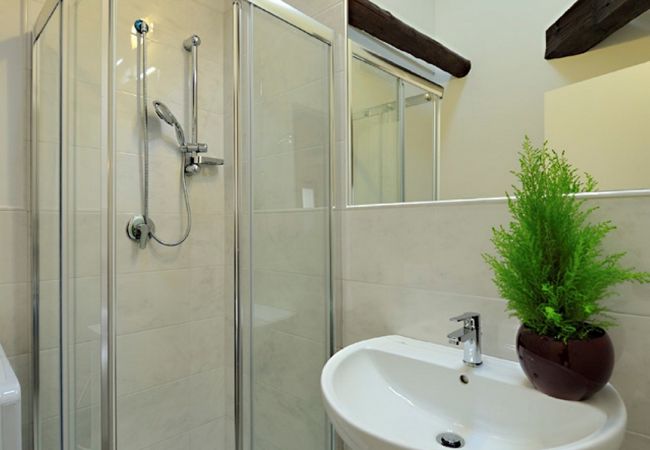 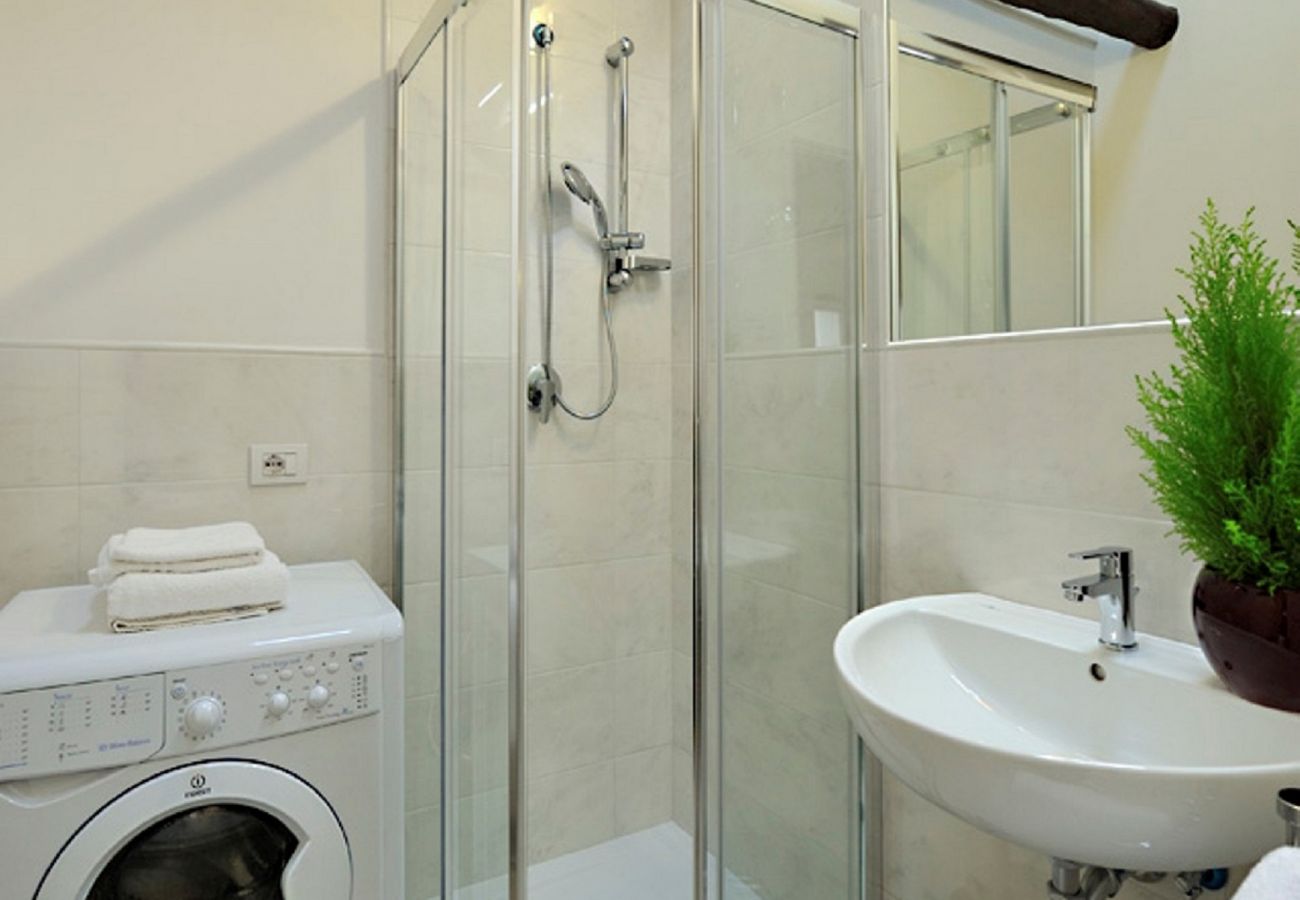 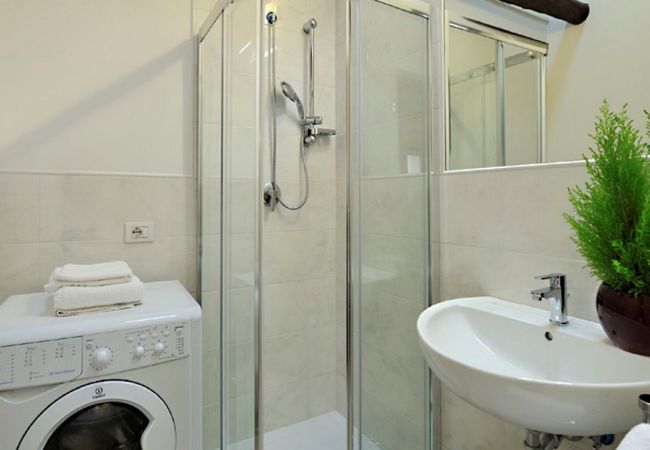 Located on the second floor of a beautiful building located in the Santa Croce district, a strategic place for the connections between Venice and the mainland, the apartment boasts all modern comforts, ample and bright windows allowing you to enjoy a great natural light, designer furnishings and ceiling with exposed wooden beams.

Apartment of 70 m2, completely new and furnished in modern style. It boasts ample and bright windows allowing you to enjoy a great natural light, designer furnishings, ceiling with exposed wooden beams as well as all modern comforts such as washing machine, dishwasher, microwave, LCD TV and free wi fi.
The apartment is divided into a living area, including a fully equipped kitchen and a living room with sofa , and a sleeping area where there is a bedroom, with a double bed and a wardrobe, and a second bedroom with two single beds and a wardrobe.
The apartment has a bathroom with shower, WC and bidet.
It is located on the second floor.
Accommodates 4 people.
Our reception will offer you on request:
- Transfer by private taxi to and from the airport
- Tours and visits
- Luggage storage
- Fruit and Champagne
- Baby sitter service

The apartment is located in the Santa Croce district, bordered to the south-east by the San Polo district, limited by the Rio di San Stae, the Rio Marin and the first part of the River Frescada, till the parish of St. Pantalon. To the south it borders the Dorsoduro district while in the north it is bounded by the Grand Canal and it is connected to the Cannareggio district via the Scalzi Bridge and the Bridge of the Constitution.
The district of Santa Croce owes its name to the church of Santa Croce, an important place of worship demolished after the suppression of Napoleon. As part of San Polo, this district belonged formerly to the area called Luprio, where there were numerous salt marshes. During the twentieth century this area, more than any other, has been the impact of the road link between Venice and the mainland, first with the construction of the port and then with the creation of the Piazzale Roma, the opening of the Rio Novo and the construction of the Tronchetto’s artificial island (the second car terminal), all direct consequences of the construction of the Ponte della Libertà/Liberty Bridge in 1933, which transformed the northern part of the district in the car terminal and in the bus station in of the lagoon city. This is the only district of Venice where there is a small area where you can move with the vehicles, albeit in a very limited way.
The apartment is therefore in a strategic location, being close to the main points of connection between the city and the mainland.
Among the churches in the Santa Croce district, there are San Giacomo dell’Orio, San Stae and the Temple of Saint Nicholas of Tolentino. We should also mention the ones consecrated to San Simeon: church of San Simeon Grando, or the Prophet, and church of San Simeon Piccolo. Contrary to what you might think, these adjectives simply reflect the importance of the saints whom they are dedicated and not the size of the buildings themselves: in fact, the church of San Simeon Grando is much smaller than the monumental one of San Simeon Piccolo.
The most valuable buildings are located along the Grand Canal. Among these, there is Ca' Pesaro, home to the Museum of Oriental Art and of the International Gallery of Modern Art, which exhibits significant works of great composers, including Gustav Klimt, Wassily Kandinsky and Matisse. Then there is the Fontego dei Turchi, which was once the warehouse where the Ottoman merchants could download their wares in Venice, today house of the Museum of Natural History, where you can see two complete skeletons of dinosaurs found during a scientific expedition funded by the Venetian businessman Giancarlo Ligabue.
The nearest ferry boat stop is Piazzale Roma.

Cancellation policies: The conditions of cancellation and payment in advance can vary. Introduce the dates of your stay and consult the conditions.
Additional notes: